Can Alzheimer’s Be Stopped? 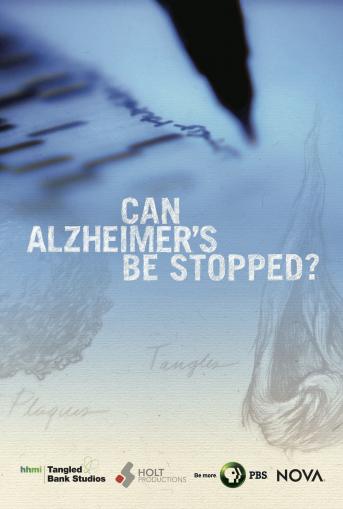 It’s one of the greatest mysteries in medical science: What causes Alzheimer’s disease? What can we do to stop it, or at least slow it down?

CAN ALZHEIMER’S BE STOPPED? transports viewers to the front lines of this fast-paced, life-and-death detective story. And the stakes couldn’t be higher: worldwide, 40 million people have Alzheimer’s, each being stripped of their memories and often their dignity on a poignant march that can lead to death.

More than 100 years ago, a doctor identified two possible causes of Alzheimer’s: gooey plaques and fibrous tangles in brain tissue, both thought to interfere with proper neural functioning. In CAN ALZHEIMER’S BE STOPPED? these two culprits are both investigated. We join scientists as they gather clues and attempt to reconstruct the molecular chain of events that ultimately leads to dementia. Along the way, we meet key researchers in the field who have helped to develop the leading theories of the disease. And with exclusive access, we go behind the scenes of a major drug trial, as researchers test therapies that may slow or even prevent Alzheimer’s.

CAN ALZHEIMERS’S BE STOPPED? provides up-to-the-minute insight into what we know—and what we don’t know—about this deadly disease. State-of-the-art animation reveals the cellular machinery that leads to plaques and tangles. It also shows the clever strategies that drug companies are testing to stop the progression of the disease.

CAN ALZHEIMER’S BE STOPPED? is more than just a medical mystery drama. It’s also a story about everyday people confronting a devastating and dramatic disease. We meet a cast of characters from all walks of life who reveal what it’s like to struggle with Alzheimer’s. In addition to the afflicted, we also meet people living with the threat of the disease—those not suffering now but genetically at risk. And we join courageous patients participating in clinical trials, key to testing drugs that may offer hope.

Shot on location in the United States, Colombia, and Denmark, CAN ALZHEIMER’S BE STOPPED? is a rich and compelling story focused on one of the most perplexing diseases of our time. Part forensic detective investigation and part heartrending drama, it strikes at the core of what makes us human: our capacity to think, to love and to remember.

“Probably the best summation to date of where research for this mind–robbing illness is headed.”

“‘Can Alzheimer’s Be Stopped?’ takes viewers behind the scenes to reveal how drug trials are designed, what makes them so challenging and why researchers are encouraged in their quest for an effective treatment.”

“Alzheimer’s ravages the minds of over 40 million victims worldwide. Join scientist as they untangle the cause of this tragic illness, and go behind the scenes of major drug trials to discover the therapies that may slow and even prevent the disease.”

With nearly 50 million people suffering from Alzheimer's disease worldwide, it is more important than ever that we find new treatments and hopefully a cure for this devastating illness. With that goal in mind, nearly 2,000 clinical trials related to Alzheimer's disease have been registered on clinicaltrials.gov, yet there are only five FDA-approved drugs available to patients, and none can halt or reverse the disease.

NOVA: CAN ALZHEIMER's BE STOPPED?

[BOSTON] – Alzheimer’s disease robs victims of their memories, their independence, and eventually their lives. It is the most common type of dementia, affecting five million people in the US alone, a number expected to double over the next 20 years as the population ages. With so much at stake, researchers, doctors, and patients worldwide are in a race to develop new drugs that could stop one of the most pressing global health challenges of our time.