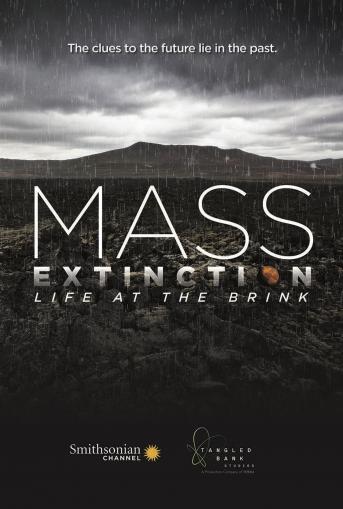 It’s a mystery on a global scale: five times in Earth’s past, life has been nearly extinguished, the vast majority of plant and animal species annihilated in a geologic instant. What triggered these dramatic events? And what might they tell us about the fate of our world?

MASS EXTINCTION: LIFE AT THE BRINK joins scientists around the globe in search of answers to two of the most dramatic mass extinctions: the “K/T Extinction,” which wiped out the dinosaurs, and “The Great Dying,” which 250 million years ago annihilated nearly 90% of all Earth’s species. The film travels from the mountains of Italy to the coasts of Spain, from the wilds of China to rugged Siberian taiga. Along the way, investigators gather clues from ancient bones, clay, crystals and rock as they attempt to create long-lost worlds. And the story they piece together is astounding.

At first glance, these two extinctions couldn’t look more different.  As illustrated with gripping animation, a six-mile-wide asteroid spelled near-instant doom for the dinosaurs.  And as new research covered in the film shows, it was massive volcanic eruptions – which spewed enough molten rock to bury an area the size of the continental U.S. under 1,000 feet of lava – that altered the chemistry of the atmosphere and ocean to trigger “The Great Dying.” As different as they seem, these two extinctions share uncanny similarities – and a message for today. Could the impact of human beings be just as devastating to the planet as a massive asteroid strike or volcanic eruptions?

University of California, Berkeley paleontologist Anthony Barnosky suspects that the wheels may already be in motion to trigger the sixth mass extinction.  Only this time, instead of volcanoes or asteroids, humans are the trigger. In bones of ancient animals, in tidal pools in California, and in forests in Yellowstone National Park, the evidence is mounting. As humans reduce habitat for other species and alter the atmosphere, we are pushing plants and animals toward extinction around 12 times faster than normal rates.  But Barnosky says it is not too late to halt that trend.

Among other experts interviewed in MASS EXTINCTION: LIFE AT THE BRINK are Kirk Johnson, the Director of the Smithsonian’s National Museum of Natural History and Elizabeth Hadly, senior fellow at the Stanford Woods Institute for the Environment and professor of biology and of geological and environmental sciences at Stanford University.

“By focusing on how researchers have pieced together these ancient whodunits, ‘Mass Extinction’ offers great insight into how science works.”

“…vividly portrays the long–gone creatures and disasters that killed them.”

“ An extremely solid documentary…plays like a jigsaw puzzle, involving theory pieced together from the fossil and genologic record.”

This Is What Caused The Biggest Extinction In Earth's History

Extinction is a scary word and a scary topic — but it's one that needs talking about. Why? Because it seems to be happening now. Scientists believe Earth is on the verge of its sixth mass extinction, an event that could devastate ecosystems all over the globe.

Cramming a lot of science into an hour, the project makes good use of computer animation and other graphics to illustrate the K/T Extinction, the asteroid strike that killed off the dinosaurs 66 million years ago; and the Great Dying, which claimed even more species 250 million years ago.

Our Planet Has Survived Five Mass Extinctions Smithsonian Channel and Tangled Bank Studios Partner To Investigate Whether We Are On The Brink Of A Sixth MASS EXTINCTION:LIFE AT THE BRINK Premieres Sunday, November 30 At 8 PM

New York, NY, September 17, 2014 - It’s a mystery on a global scale: five times in Earth’s past, life has been nearly extinguished, the vast majority of plants and animals annihilated in a geologic instant. What triggered these dramatic events? And what might they tell us about the fate of our world? MASS EXTINCTION: LIFE AT THE BRINK, narrated by Jeffrey Wright, a new one-hour special premiering Sunday, November 30 at 8 p.m. ET/PT on Smithsonian Channel, is produced by Tangled Bank Studios, the film and television unit of the Howard Hughes Medical Institute (HHMI).