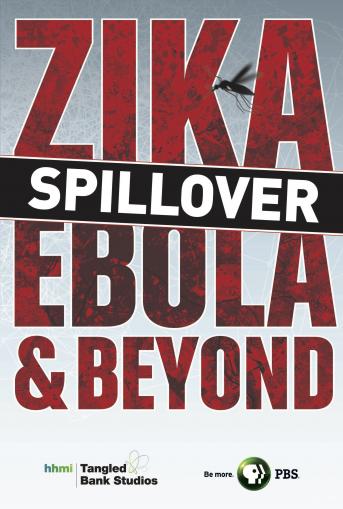 Zika. Ebola. MERS. These are viruses that ‘spill over’ from animals and infect humans, often with devastating results. In the last half-century the number of spillover viruses has quadrupled, costing countless lives. Typically, people learn about outbreaks as sudden disconnected flare ups. But these viruses have much in common: where they come from, how they maim and kill, and how they can be controlled. By telling deeply human stories of disease victims and health care workers, SPILLOVER — ZIKA, EBOLA & BEYOND goes beyond the headlines to convey important, usable information about spillover viruses, at a time when viewers need it most.

SPILLOVER — ZIKA, EBOLA & BEYOND is shot on location around the world, including viral hot spots of West Africa, Asia, and Central America. The film is a stunning mix of cinéma vérité reporting, striking graphics sequences, and reenactments in the style of a graphic novel. Audiences hear firsthand from survivors and witnesses of some of the most horrific outbreaks in recent history. Dynamic interviews with many of the world’s preeminent disease detectives, including the CDC’s Thomas Frieden, National Institute of Allergy and Infectious Disease Director Anthony Fauci, and Nigerian Director of Infectious Diseases Christian Happi—among others—provide historic context for outbreaks and help explain basic concepts critical for understanding the threats we face. For example, what are viruses? How do they infect the body? What are their main strategies of attack?

On the front lines of the West African Ebola outbreak, epidemiologist Lina Moses explains the disease is transmitted ‘by love’ when family members care for sick children and parents and fall ill themselves. Moses introduces the heroes of the outbreak—health care workers who quarantined the sick and monitored those close to them. These ‘contact tracers’ stopped the spread of disease, but died by the dozens. In Lagos, Africa’s most populous city, we witness how this boots-on-the ground strategy was instrumental in stopping Ebola from potentially going global, and continuing to spread for years.

To make sure audiences don’t get the wrong message about the animals that carry diseases, SPILLOVER — ZIKA, EBOLA & BEYOND is careful not to scapegoat them. In Bangladesh, where the Nipah virus is spread by bats, epidemiologist John Epstein explains how the animals are vital for seed dispersal and controlling insects throughout the world. Similarly, primates that carry diseases are important members of food webs, and can’t simply be eliminated. In fact, the film points out it is human settlements encroaching on wild places that set the stage for dangerous virus spillover.

SPILLOVER — ZIKA, EBOLA & BEYOND concludes that spillover diseases are here to stay but by improving healthcare at local levels, and monitoring known sources of viruses, we may be able to stop outbreaks from turning into epidemics. As epidemiologist Emily Gurley cautions, only by looking at the big picture can we prevail: “…Unless we accept that our fate is linked across people and across animals across the world, then we’re never going to do what’s needed to get ahead of these kinds of public health threats.”

“A powerful documentary chronicles the mysterious viruses, such as Ebola and Zika, that jump from animals to people–any one of which could one day cause the next great pandemic.”

“‘Spillover–Zika, Ebola & Beyond’ will provide viewers with a clear explanation of how more than 70 percent of diseases transfer from animals to infect humans. The documentary lays the foundation for viewers by explaining how the world has historically handled parallel health emergencies and how experts plan on navigating the growing threats.”

“This well–crafted (and disturbing hour) takes a broader view. It shows how Ebola spread from African villages, almost becoming a pandemic that would have killed millions globally. It shows how other diseases have had similar routes, with Zika leaping from unknown to crisis.”

The word ‘Spillover’ is the term given to when things like Ebola and countless other deadly viruses are transmitted by wild animals and passed to humans.  Essentially this is nature and humanity intersecting at its worst.

SPILLOVER-ZIKA, EBOLA & BEYOND: DOCUMENTARY INVESTIGATES THE RISE AND SPREAD OF VIRUSES WORLDWIDE AND HOW TO STOP THE NEXT PANDEMIC

Arlington, VA; July 11, 2016 — Around the globe, viruses are on the march: Zika, Ebola, Nipah, Chikungunya, Dengue and West Nile. All of these viruses reside in animals and have the potential to “spillover” and infect humans. What’s behind the rise in spillover viruses? Are the United States and the world prepared to anticipate, contain and prevent the next outbreak?